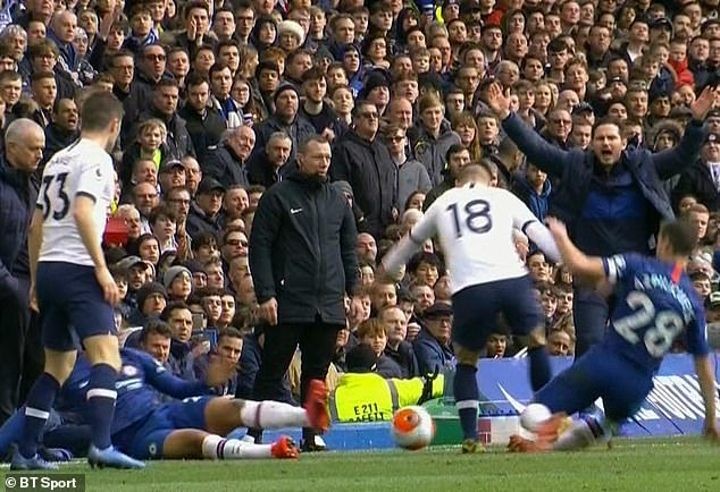 VAR has admitted they made a mistake by not sending off Giovanni Lo Celso after his violent stamp on Cesar Azpilicueta's leg.

The midfielder's studs crunched down on the Chelsea defender, leaving him in severe pain but fortunately without a serious injury.

Referee Michael Oliver did not take any action on the pitch but VAR reviewed the incident for some time from multiple angles.

They concluded it was not worthy of a sending off and Oliver did not check the on-pitch monitor to see the challenge himself.

Match of the Day 2 presenter Mark Chapman said he asked why a red card was not issued and he was told: 'It wasn't a clear and obvious error because VAR didn't feel there was anywhere else for him to put his foot.'

But later in the match, the officials in Stockley Park revealed that it was worthy of a red card and they made a mistake.

Glenn Hoddle said at the time, agreeing with VAR: 'I'm not sure that's a violent stamp on him, I think he's tried to drag the ball back. If he was gonna try and top him he'd be a little bit higher than that.'

But many former players including Michael Owen, Ian Wright, John Hartson and Ray Parlour have since blasted the decision on social media.

Many criticised Michael Oliver for not looking at the monitor on the pitch to review the decision himself.

While others said Azpilicueta was lucky not to have been given a serious injury for the dangerous challenge.

It is the latest ruling by VAR to anger fans after Harry Maguire was not handed a red card against Chelsea on Monday.

The defender ended up on his back in the Chelsea technical area, tussling with Michy Batshuayi, and straightened his studs into the Belgian's groin.

After a review, no action was taken.

Meanwhile Raheem Sterling's attempt to win the ball against Tottenham saw him step on Alli's ankle but the Video Assistant Referee (VAR) did not deem the challenge worthy of a red card.

The decision angered Spurs boss Jose Mourinho who was adamant the England man should have been sent off.

Giovani Lo Celso SHOULD have been sent off for STAMP on Cesar Azpilicueta as VAR reveal they made a mistake when watching replay of incident... having initially claimed the midfielder had nowhere to put his

Gareth Jones · Journalist The Frenchman was handed his first league start since November and rewarded boss Frank Lampard's trust with his fine first half strike and a hand in Chelsea's second. Marcos Alonso doubled

FRANK LAMPARD and Chelsea humbled Jose Mourinho again thanks to goals from Olivier Giroud and Marcos Alonso. On the ground where Lampard and Mourinho enjoyed such happy times together, the former Chelsea boss was serenaded with

Giovani Lo Celso was the luckiest man around as Michael Oliver and VAR somehow handed the Spurs man a reprieve after his stamp on Cesar Azpilicueta. The Spurs midfielder arrived at the ball very

The world number one held a two-shot overnight lead but, with low END_OF_DOCUMENT_TOKEN_TO_BE_REPLACED

Today only, as part of its Gold Box Deals of the Day, END_OF_DOCUMENT_TOKEN_TO_BE_REPLACED