AI Is Used to Discover a Novel Antibiotic 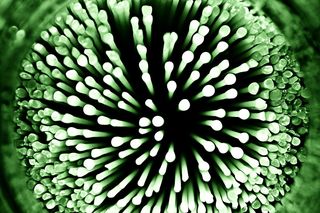 Researchers announced the breakthrough discovery of a new type of antibiotic compound that is capable of killing many types of harmful bacteria, including deadly antibiotic-resistant strains, and published their findings in Cell on February 20. What makes this remarkable is that the researchers, from the Massachusetts Institute of Technology (MIT), Harvard, and McMaster University, used machine learning (a form of artificial intelligence) to discover the new antibiotic-an achievement that heralds the disruption of traditional research and drug development processes deployed by pharmaceutical industry behemoths.

Antibiotic resistance is a global threat that is exacerbated by the overuse of antibiotics in livestock, the proliferation of antimicrobials in consumer products, and over-prescription in health care. Though estimating the future impact is challenging, one report predicted that by 2050, 10 million deaths per year could result from antimicrobial-resistant (AMR) infections.

Combating the problem of antimicrobial resistance requires bringing novel compounds to market. Yet the drug discovery process is long and fraught with risk. It takes on average anywhere from 10 to 15 years to develop a drug from inception to market. In the U.S. only 12 percent of drug candidates get FDA approval. In the case of antibiotic drugs, the margins are significantly lower compared to drugs used to treat diseases such as cancer. With lower profit margins comes lower interest within the pharmaceutical industry in developing new antibiotics, which further exacerbates the AMR threat.

The researchers trained a deep neural network to predict molecules with antibacterial properties, namely the inhibition of the growth of Escherichia coli (E. coli), from a set of 2,335 diverse molecules. The trained model was then used to identify potential molecules by running several chemical libraries with over 107 million molecules. Candidates were selected based on availability, prediction score, and chemical structure.

The novel antibiotic identified was the c-Jun N-terminal kinase inhibitor SU3327, renamed halicin by the researchers. According to a MIT news report released today, the name was inspired by the fictional sentient computer HAL (Heuristically Programmed ALgorithmic Computer) from Arthur C. Clarke's Space Odyssey series of science fiction novels and 2001: A Space Odyssey, the iconic 1968 film directed by Stanley Kubrick.

The researchers reported in Cell that halicin is "structurally divergent from conventional antibiotics and displays bactericidal activity against a wide phylogenetic spectrum of pathogens including Mycobacterium tuberculosis and carbapenem-resistant Enterobacteriaceae," and that it was effective against " Clostridioides difficile and pan-resistant Acinetobacter baumannii infections in murine models."

"In addition to halicin, from a distinct set of 23 empirically tested predictions from >107 million molecules found in the ZINC15 database, we readily discovered eight additional antibacterial compounds that are structurally distant from known antibiotics ... Remarkably, two of these molecules displayed potent broad-spectrum activity and could overcome an array of antibiotic-resistance determinants in E. coli. This work highlights the significant impact that machine learning can have on early antibiotic discovery efforts by simultaneously increasing the accuracy rate of lead compound identification and decreasing the cost of screening efforts."

In addition to identifying drug candidate molecules, the pattern-recognition capabilities of deep learning can be used to predict in silico organic reaction outcomes, drug performance in testing, and toxicity prior to clinical trials. AI can help automate molecule design and accelerate both computer-aided synthesis and retrosynthesis based on molecular similarity.

The deployment of AI machine learning in drug discovery will likely shorten the drug development life cycle and has the potential to significantly outpace the existing pharmaceutical industry process in the not-so-distant future.

Meredith Jones Russell Childhood eczema cannot be prevented by daily moisturiser use, according to new research. Despite recommendations by many healthcare workers to use moisturisers to prevent eczema in newborn babies, the study found no evidence

"They are traumatised," said Namusisi, who wakes up at 3 a.m. every day to talk to her daughters over the Chinese messaging service WeChat. "They ask, has Uganda given up on us?" Countries

Four Iranians have died after contracting coronavirus, with health authorities warning the virus has spread to multiple cities, while Israel and Lebanon declared their first domestic cases as the deadly epidemic spreads across the Middle

Joel Embiid believes he is the world's best basketball player. The Sixers' END_OF_DOCUMENT_TOKEN_TO_BE_REPLACED

For the second time this week, house owners of older Google telephones END_OF_DOCUMENT_TOKEN_TO_BE_REPLACED

Even when they are talking about their children's potential Hollywood careers, Kristen END_OF_DOCUMENT_TOKEN_TO_BE_REPLACED

As of Friday, more than 76700 cases of coronavirus have been reported, END_OF_DOCUMENT_TOKEN_TO_BE_REPLACED