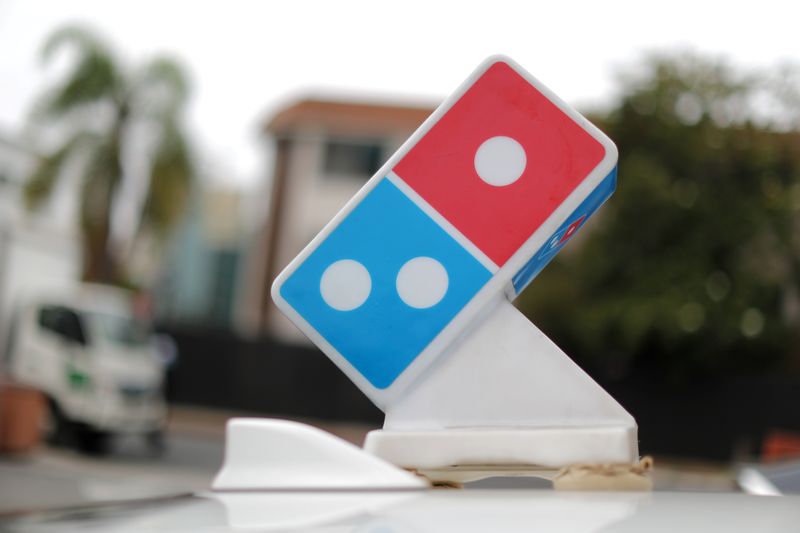 Sales at its established U.S. restaurants rose 3.4% in the fourth quarter, beating estimates for the first time in over a year. Analysts had projected a rise of 2.3%, according to IBES data from Refinitiv.

The pizza chain has been opening new stores, launching new menu items and offering faster deliveries to battle competition from rival pizzerias, mom-and-pop stores and aggregators such as Uber Eats, Postmates and GrubHub.

As third-party delivery services make it easier for diners to order a variety of food to their door step at the touch of a button, chains like Domino's have been investing heavily to keep customers coming back for their fast service and offers.

As a part of these efforts, Domino's offered half off on menu-priced pizzas for online orders during the Cyber Monday week and also expanded its GPS delivery tracking technology across its U.S stores during the reported quarter.

"Our relentless focus on our customers, our franchisees ... helped us deliver a solid 2019 in the face of unique competitive headwinds," Chief Executive Officer Ritch Allison said.

The Ann Arbor, Michigan-based company has also been aggressively opening new restaurants in a move it calls "fortressing" to facilitate faster delivery to more locations.

On an adjusted basis, the company earned $3.13 per share, 15 cents above expectations.

The company's shares, which were last up 19.5% at $355 before the bell, are set to open at a record high on Thursday.

(Reporting by Nivedita Balu in Bengaluru; Editing by Shounak Dasgupta and Shinjini Ganguli)

Shares of Virgin Galactic vaulted 310% in the past three months and Morgan Stanley says the space tourism stock is due for " a bit of a breather here." The firm added that "a modest

Today's Big Picture The main equity indices closed mostly in the green in Asia today after China cut its 1-year loan prime rate (LPR) by ten basis points and its 5-year by five basis points. This

Fortnite Creative is exceptional fun, and thanks to the new Season dropping END_OF_DOCUMENT_TOKEN_TO_BE_REPLACED