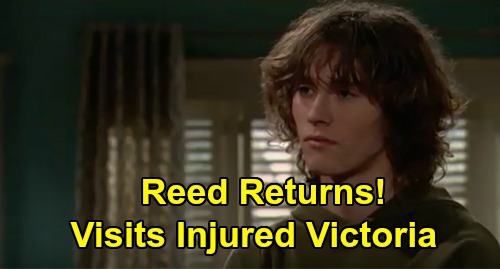 The Young and the Restless (Y&R) spoilers tease that a big return is coming up. Tristan Lake Leabu will reprise his role as Reed Hellstrom - and he'll have a troubling reason to head home! Victoria Newman (Amelia Heinle) will be hospitalized following Ripley Turner's (Christian Keyes) shocking attack, so that'll obviously be a scary situation for her loved ones.

In the immediate aftermath, Victoria will have the Newman clan to rally around her. Victor Newman (Eric Braeden), Nikki Newman (Melody Thomas Scott), Abby Newman (Melissa Ordway), Nick Newman (Joshua Morrow) and Adam Newman (Mark Grossman) will all be present in the waiting room. Chelsea Lawson (Melissa Claire Egan) will also stay by Adam's side as he deals with this family crisis.

Victor will feel pretty helpless, so he'll start playing the blame game. It'll make him feel like he's accomplishing something while Victoria's doctors get to work. Y&R spoilers say Victor will point the finger at Billy Abbott (Jason Thompson) - along with Ripley of course. Victor will make it clear that Paul Williams (Doug Davidson) that Billy's just as much at fault here.

Naturally, that won't really be true. Billy would never want to hurt Victoria and will truly be broken up about all this. Whether Billy calls Reed or perhaps one of the Newmans, it won't be long until Reed is summoned to be with his injured mother.

Fortunately, The Young and the Restless spoilers, updates and news say Victoria will awaken before Reed arrives. It looks like Victoria will be recovering from a stab wound, so she'll want to know the truth about her condition. Victoria will expect answers about how bad her injuries were and how long it might take her to recover.

As for Reed, he'll finally make it back to Genoa City on March 2. Reed should just be happy that his mom's going to pull through. It'll be nice for Reed to pay Victoria a visit during this difficult time and hopefully lift her spirits. Victoria will need all the support she can get as she heads down recovery road.

In addition to Reed's support, Victoria will have plenty of support at Newman Enterprises. It appears Victor will push Nick to step up as CEO while Victoria's on the mend. Are you looking forward to seeing Tristan Lake Leabu return as Reed Hellstrom?

The Flyers face a massive opportunity to strengthen their playoff chances. The opportunity starts Tuesday night as the Flyers (32-20-7) host the Blue Jackets (30-18-12). Let's get into the essentials: * When: 7 p.m. ET with Flyers Pregame

The Young and the Restless (Y&R) spoilers recap for Wednesday, February 19, teases that Eric Braeden's (Victor Newman) tribute show will pack in plenty of flashbacks and fun. As Braeden celebrates 40 years

With the 2020 NBA All-Star break in progress, the Los Angeles Lakers and other championship contenders are looking to improve their rosters now. While the Lakers did not make a move at the 2019-20 NBA trade

The Seattle Seahawks have struggled with injuries at the tight end position, and they are adding another injury-plagued tight end to the mix. Two weeks following his release in Carolina, Greg Olsen has

All-Star Saturday featured three competitions that came down to the wire. Bam END_OF_DOCUMENT_TOKEN_TO_BE_REPLACED