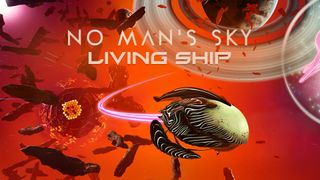 Hello Games is out of control. That much has become apparent as the studio prepares to launch its ninth major free update for No Man's Sky. Following the release of Beyond last summer, there had been an expectation that the flow of new content would begin to slow; that the addition of full virtual reality support, an expanded multiplayer experience, and a suite of new creation tools would signal that No Man's Sky three-year redemption arc was coming to an end. If the No Man's Sky Living Ship update is anything to go by, Hello Games knows that there is still plenty of uncharted territory left in its procedurally-generated universe to explore.

The update shows Hello Games leaning more heavily than ever before into the weird and wonderful side of science-fiction. If you boot up No Man's Sky today, you'll find that a whole new race of biological spaceships has been introduced to the game. And by 'biological spaceships' I do in fact mean organic entities that begin life as an egg which can then be nurtured by players into a unique flyable ship. Introducing something so strange was never the studio's intention, the game's creative director Sean Murray tells me, but that's indicative of the studio's approach to design, iteration, and creative execution.

"I remember when we first started talking about doing a new ship. We thought - maybe something geometric, something simple and abstract. So one of our artists started working on it - the same one who made the wild heads you see on Travellers in the Space Anomaly - and of course they just went in their own direction and made something complex, alien, and organic!"

"But that's typical of the way we do a lot of things," Murray continues. "People have freedom to try stuff out, and if it captures the imagination of the team then we all get on board and run with it. It's great when a concept drawing then inspires someone else to think of new gameplay to go with it, or a new story, or some new rendering technique we might need, whatever it sparks in them."

That isn't hyperbole either, Murray is quick to note that a culture of experimentation is at the heart of Hello Games' ethos - helping to drive the successful elements of the Beyond update. "I think we're always experimenting. VR was something people thought couldn't be done in No Man's Sky - it was a giant experiment. Same with the full multiplayer that featured in Beyond - it was something our network coder wanted to try out and we just ran with it."

Between the Next and Beyond expansions - and the smaller-scale Foundation, Path Finder, Atlas Rises, The Abyss, Visions, and Synthesis updates released around them - No Man's Sky is undoubtedly in the strongest position it has ever been. It's the sort of boost that gives a team the confidence to continue pushing outside of its comfort zone to explore new ideas and concepts.

"I think it's fair to say the game is in a really good state and that's a lot of fun for us as a team. Beyond and Synthesis helped make it more coherent as an experience in a way we're really happy with," says Murray. "The numbers from the community reflect that - we have more players now, in this period, than in any previous year. Our player base is the most active and engaged they've ever been outside of the spike you get at a giant update, and that's a really cool and sustainable thing."

It's that support and encouragement from the community that has gotten Hello Games and No Man's Sky where it is today. Describing the starring element of the Living Ship update, Murray explains that these new organic ships change some of the fundamentals of play in a number of interesting ways. If anything, it sounds as if Living Ship is the launchpad for some brand new mechanics and systems that could be further iterated upon over the months and years to come.

"You won't see these ships in the wild - you'll have to do a brand new mission chain to earn them, all based around growing and nurturing different body parts," says Murray of the way that players will be able to get their hands on one of these new ships. "We're using that mission to experiment with some new gameplay styles - things that we won't put everywhere, that are challenging and time-consuming for the player, but we'll watch the reaction and learn where we could apply these things more widely to give the community the types of gameplay they're craving for."

It's impossible to know how Hello Games could expand out the idea of growing organic beings in the future, so for now, we'll have to settle for how obtaining and evolving these new ships works in practice. If you listen to Murray tell it, No Man's Sky is about to get a whole load of strangely endearing activities to complete. "Once you've hatched and grown your own ship, it has a unique seed - the heart of our proc-gen system - that sets how it looks," he continues, hinting at the amount of variance you should expect to find with these ships. "You can't just hang around a station rejecting ships for the wrong coloured wings or whatever - this is a living being and you grew it!"

Completing missions to grow and nurture different body parts of the ship? Sure thing, Sean Murray. Needing to feed the ship organic matter to fuel its warp drives? Why not, Hello Games. An upgrade tree built around hunting for strange eggs on even stranger planets like you're on a hallucinogenic Easter Egg hunt? I mean, I kind of makes sense, doesn't it?

Awesome looking organic ships and weird objectives, mission cycles, and gameplay loops aren't the only new thing arriving in the No Man's Sky Living Ship update. Hello Games is adding more variety to the space side of the game. It's introducing new points of interest as you traverse between solar systems, NPC ship encounters, and a raft of quality of life improvements.

"We listen to the community a lot, but we also know inherently where our focus needs to be. The space exploration features we've shipped in this update are things that one of the team first experimented with around the time of Next. We knew it was a cool idea, but the time wasn't right to fully implement them. As a small team we spend a lot of time spinning plates, and have to make a lot of hard calls about what we do when - always with an eye on what people are asking for, what we see ourselves as developers, and what we see from more data-led research," Murray says, adding, "the team had a lot of fun making these encounters - people really went a bit wild with some of them - and we hope people see that when they play."

This has been a hell of a lot of work for Hello Games. It's also been something of a surprise, as the studio never planned to go back to smaller updates (like Synthesis and Living Ship) between its big tentpole expansions (Next and Beyond). "If you asked us late last year, we would have probably thought we were going to do another giant update," Murray tells me, but, in truth, the team can't help but run wild with every idea that is put in front of it.

"Synthesis ended up bigger than we expected. We planned it as a small spring-cleaning update and the team went wild reading all the community requests and became really motivated to fix as much as possible, and it just ballooned from there. Then we had Bytebeat," Murray continues, noting the small December update which allows players to create their own music within the game, "where it was something that didn't fit into previous updates but was ready shortly afterward. We could have held onto that and shipped it sometime this year, but it felt bad to have this cool feature sitting off in a vault somewhere when people on the team were really passionate about it, and would be really fun for the community. So we thought - well, let's just release it then!"

"The community has responded to us releasing more actively, and we can really give each feature the attention to deserves to make it fun," says Murray. "We looked at things we had planned for 2020 and wondered what would benefit from having its own release - the Living Ship was a really good fit. We've been able to give it this cool story, a new style of mission gameplay, and this mini-ARG because it became the star - it would have been harder to do that if it was in the middle of a Beyond-sized update."

Looking for more details on the update? Read on to find out about how No Man's Sky Living Ships update adds bio-organic spacecraft you can grow from an intergalactic egg.

What then is next for No Man's Sky? Murray can't help but tease out an exciting future for the space-sim that shows no sign of slowing down. "We'll still be doing big updates - people on the team are working on some super ambitious things right now. But I think it makes sense to find a balance, where it suits the team, the community and adds extra fun to whatever the feature is."

A possible logo for the mysterious new Warner Bros. Montreal Batman game has been revealed thanks to an interesting photo from their offices. After several cryptic teases and the recent rumor that the next Warner Bros.

ONE of South America's most active volcanoes may be at risk of a partial collapse, according to scientists. Nicknamed the "Throat of Fire", Tungurahua volcano in Ecuador has become unstable, likely due to damage caused by

(Image credit: Shutterstock) If you're looking to download ProtonVPN software, be careful -- there's a fake version of the popular VPN client that infects your computer with malware designed to steal your passwords and any

Mixer streamer and professional Fortnite player Ninja is one of the most famous gaming personalities in the world, having appeared on talk shows like Ellen and set for a cameo in the upcoming

LendingClub, a personal loan-focused fintech company, announced on Tuesday the acquisition of END_OF_DOCUMENT_TOKEN_TO_BE_REPLACED

Goalie Louis Domingue makes 36 saves for the Devils, who were shut END_OF_DOCUMENT_TOKEN_TO_BE_REPLACED