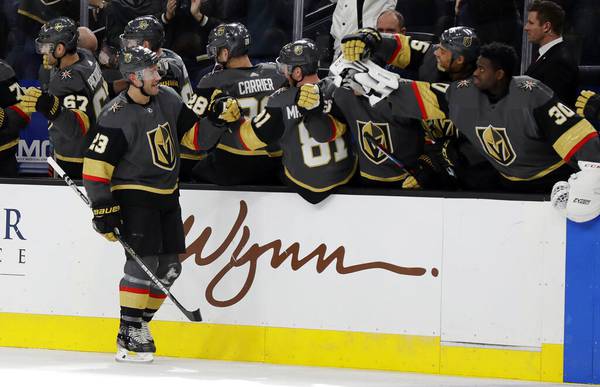 The second period was far better for the Golden Knights than the first was, and it showed on the scoreboard. Vegas added a pair of goals in the second and led the Tampa Bay Lightning 3-2 after two periods at T-Mobile Arena on Thursday.

Paul Stastny got the goal, but if they could split the stat between two people they would. Nate Schmidt got the play started, walking in and finding Reilly Smith down the wing. Smith then fired a perfect dart to Stastny's stick, allowing him to redirect it into the goal at 6:45 for the first Vegas lead of the game, 2-1.

That wasn't going to be the end of the scoring this period, not with these two teams. It took until later in the frame and for the Lightning to go to the power play for the second time, but Steven Stamkos evened the game.

Tampa Bay executed an umbrella power play just the way you draw it up. Anthony Cirelli started the play down low, finding Hedman alone at the top of the point. Hedman dished over to Stamkos in the left circle, who blasted it at the net. It appeared to deflect off Nick Holden's stick in front, but it ended up in the net at 15:38.

The Lightning had 61 seconds to enjoy the tie game. Max Pacioretty and Mark Stone had a 2-on-1 and when the defenseman went to cover Pacioretty, he flipped the puck to Mark Stone for a breakaway. Stone deked around Andrei Vasilevskiy then put the puck into the net off his backhand at 16:39 for a 3-2 Vegas lead.

That Stone scored was a nice feeling for Golden Knights fans, who started the period with a scare when he did not come out to begin the frame. He took his last shift of the first with 6:44 left, then did not join the team when the second period began, only to hop on the ice with 15:37 remaining. He did not show any adverse effects, clearly.

The Golden Knights led in shots on goal through two periods, 25-21.

It always seems to happen with this team that the new guy scores a big goal. Alec Martinez played that role on Thursday, scoring in the first period of his first game with the new team.

Martinez's goal helped the Golden Knights stay afloat in a battle with the Tampa Bay Lightning, and the first period at T-Mobile Arena ended in a 1-1 tie.

The Lightning may have dominated play early, but it was a fortunate bounce that got them on the board first. Kevin Shattenkirk brought the puck down the right wing and attempted a centering pass. The puck bounced off Nick Holden's skate and into the net for his seventh of the season at 7:02. It was a tough bounce for Vegas, and an early 1-0 hole.

The Golden Knights made Marc-Andre Fleury work after that. Jon merrill took a hooking call that allowed a lethal Tampa Bay power play to get to work. It generated three dangerous shots on goal in a 14-second span, but Fleury turned them all away.

Then the new guy decided to get his team back into it. Cody Eakin had the first shot, bouncing it low of Andrei Vasilevsiy's pad to set up a juicy rebound for the player streaking down the left wing. Naturally, that was Martinez, who was traded to the Golden Knights yesterday. His shot trickled through Vasilevskiy's pads to even the game at 18:05.

Martinez had one goal 41 games this season prior to the trade, and scored on his seventh shift with his new club.

Alec Martinez had seen the writing on the wall for months. He was a productive defenseman on a team at the bottom of the standings and knew his services may be desired elsewhere. Then he was scratched from his team's game on Tuesday, saw the reports swirling around online and knew he was about to be a Golden Knight.

Vegas acquired Martinez from the Los Angeles Kings on Tuesday for a pair of draft picks. He will make his Golden Knights debut against the Tampa Bay Lightning, which have won 11 games in a row, at 7 p.m. today at T-Mobile Arena.

"It's obviously been a pretty crazy 24-48 hours," Martinez said. "Tough to say goodbye to certain people there (in Los Angeles), but that said, if I had a spot to pick, it'd definitely be here. I'm certainly really excited to join this club."

They didn't play together often, but they talked on the phone once it was clear Martinez was being traded to Vegas, McNabb said.

"I told him a little bit about here and he's excited, and he wants to win, and he's going to fit in great with us," McNabb said. "I think he's excited to come to a team that's winning (with) a good playoff chance. I think he likes our team a lot and obviously we do too, and he's just going to add strength to our group."

The Golden Knights are a rare home underdog against Tampa Bay, which has the league's best offense. No team has scored more goals than the 215 that Tampa Bay has (3.58 per game).

It puts the impetus on the defense to stop the monsters Tampa Bay has in its forward unit. Reigning Hart Trophy winner Nikita Kucherov hasn't slowed down much with a team-best 73 points, but Steven Stamkos (62 points) and Brayden Point (57) aren't far behind. All three would be at the top of Vegas' scoring list.

Vegas coach Peter DeBoer said defense continues to be a key, and "it usually leads to offense."

"The nice thing is when you play a team like this with the record they have and how they're playing lately, the coach doesn't have to say a whole lot," DeBoer said. "The guys know the challenge in front of them, and we have to make sure we're ready."

The Golden Knights lost to the Lightning 4-2 in Tampa Bay on Feb. 4 but outshot them, which provides a boost against a team on a hot streak. Vegas is 3-2 all-time against Tampa Bay, including a 1-1 mark at T-Mobile Arena.

Latest release Mafia, a Tamil language film, was one of the much-awaited regional films as it stars two of the handsome hunks of the Tamil industry. The star cast of the film includes Arun Vijay

SAN FRANCISCO - Rockets guard Russell Westbrook, with 13 technical fouls this season after receiving two on Thursday, said he has been unfairly labeled, putting him close to the automatic one-game suspension that comes with

Mafia By: MOVIEBUZZ Critic's Rating: 2.5/5 Friday 21 February 2020 Director Karthick Naren's Mafia is a stylish action thriller in which the glossy presentation and gimmicks work at a slick running time of 112 minutes.

SAP India has shut the offices in Bengaluru, Gurugram and Mumbai for END_OF_DOCUMENT_TOKEN_TO_BE_REPLACED

Maha Shivratri 2020 is being celebrated across India today with much fanfare. END_OF_DOCUMENT_TOKEN_TO_BE_REPLACED

Mafia, as the name suggests, is about a drug-dealing gang who has END_OF_DOCUMENT_TOKEN_TO_BE_REPLACED

Detroit — The Pistons have seen this movie before. After 10 losses END_OF_DOCUMENT_TOKEN_TO_BE_REPLACED

Recently, Mixer streamer and professional Fortnite player Ninja made waves on the END_OF_DOCUMENT_TOKEN_TO_BE_REPLACED